Martin, Mattson, and Maudsley (2006) have a study suggesting benefits to fasting:

[Abstract] The vulnerability of the nervous system to advancing age is all too often manifest in neurodegenerative disorders such as Alzheimer's and Parkinson's diseases. In this review article we describe evidence suggesting that two dietary interventions, caloric restriction (CR) and intermittent fasting (IF), can prolong the health-span of the nervous system by impinging upon fundamental metabolic and cellular signaling pathways that regulate life-span. CR and IF affect energy and oxygen radical metabolism, and cellular stress response systems, in ways that protect neurons against genetic and environmental factors to which they would otherwise succumb during aging. There are multiple interactive pathways and molecular mechanisms by which CR and IF benefit neurons including those involving insulin-like signaling, FoxO transcription factors, sirtuins and peroxisome proliferator-activated receptors. These pathways stimulate the production of protein chaperones, neurotrophic factors and antioxidant enzymes, all of which help cells cope with stress and resist disease. A better understanding of the impact of CR and IF on the aging nervous system will likely lead to novel approaches for preventing and treating neurodegenerative disorders.
at 10:17 AM No comments:

The following life expectancy table from a paper by Arias is interesting: 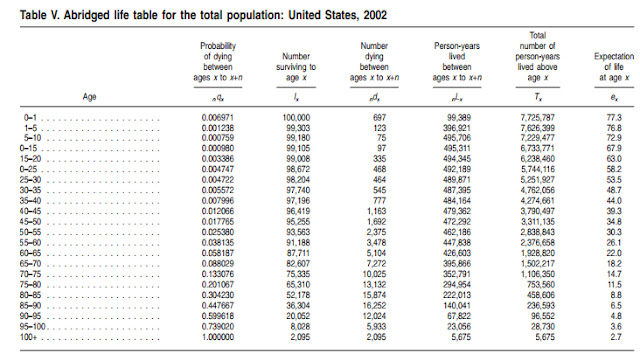 Alfalfa sprouts contain canavanine, which is clearly toxic. People with arthitic symptoms should be particularly careful.
at 11:57 PM No comments:

Hypertension is a huge problem in the U.S. among older Americans, as can be seen from this chart based on the results of a 1995 study by Burt and colleagues: 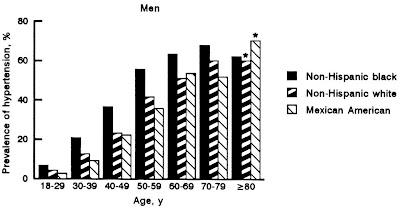 As men reach their 50s, the numbers approach 50% (white males) and exceed that for black males. This is unfortunate. Research has shown that even having high normal blood pressure (130-139/85-89) leads to a 1.6 increase in the hazard ration for cardiovascular disease among men age 35 to 64.

Reductions in sodium have been found to have a great effect the higher the initial blood pressure and the older the patient.

Blood pressure problems are even more acute in Europe than in the U.S., making this one of the few areas of health where Americans seem to have an advantage over the slimmer and healthier Europeans.

An article by Kannel (1996) provides a good summary of the issue of hypertension:

Hypertension is one of the most prevalent and powerful contributors to cardiovascular diseases, the leading cause of death in the United States. There is, on average, a 20 mm Hg systolic and 10 mm Hg diastolic increment increase in blood pressure from age 30 to 65 years. Isolated systolic hypertension is the dominant variety. There is no evidence of a decline in the prevalence of hypertension over 4 decades despite improvements in its detection and treatment. Hypertension contributes to all of the major atherosclerotic cardiovascular disease outcomes increasing risk, on average, 2- to 3-fold. Coronary disease, the most lethal and common sequela, deserves highest priority. Hypertension clusters with dyslipidemia, insulin resistance, glucose intolerance, and obesity, occurring in isolation in less than 20%. The hazard depends on the number of these associated metabolically linked risk factors present. Coexistent overt cardiovascular disease also influences the hazard and choice of therapy.

One study from the 1990s showed that blood pressure levels above optimal level led to a significant jump in cardiovascular risks:

Ludwig (2009) has an interesting short article on why we may need to be concerned about diet soda consumption.

A recent study by Nettleton and colleagues finds an increased risk of metabolic syndrome in people who drink diet soda.

This study, done back in the 80s, is interesting in that it finds a correlation between diet soda intake and risk of one type of cancer. As would be expected, veggies and fruits are protective. White bread, on the other hand, is associated with increased risk.

The findings of a case-control study of cancer of the pancreas, which was conducted in the Baltimore metropolitan area, are reported. Two hundred one patients with pancreatic cancer were matched on age (±5 years), race, and sex to hospital and non-hospital controls, the latter selected by random-digit-dialing (RDD). All subjects were interviewed regarding diet, beverage consumption, occupational and environmental exposures, and medical and surgical history. Significantly decreased risks were associated with consumption of raw fruits and vegetables and diet soda, and significantly increased risks were associated with consumption of white bread when cases were compared with hospital and RDD controls. A significantly reduced risk was associated with consumption of wine when cases were compared to RDD controls. Risk ratios for consumption of coffee were not significantly different from one, although there appeared to be a dose-response relationship in women. A moderate but statistically nonsignificant increase in relative odds was found for cigarette smoking, and cessation of smoking was associated with a marked reduction in risk. No significant associations were found with particular occupational exposures. Tonsillectomy was associated with a significantly reduced risk, a finding that has been observed for other cancers as well. The current evidence indicates that pancreatic cancer is likely to result from a complex interaction of factors and suggests that the study of its etiology requires a multidisciplinary approach involving both laboratory and epidemiologic components.
at 5:54 PM No comments:


Abstract
In excess of 55% of adults in the United States are classified as either overweight (body mass index = 25-29.9 kg.m(-2)) or obese (body mass index > or = 30 kg.m(-2)). To address this significant public health problem, the American College of Sports Medicine recommends that the combination of reductions in energy intake and increases in energy expenditure, through structured exercise and other forms of physical activity, be a component of weight loss intervention programs. An energy deficit of 500-1000 kcal.d-1 achieved through reductions in total energy intake is recommended. Moreover, it appears that reducing dietary fat intake to <30% of total energy intake may facilitate weight loss by reducing total energy intake. Although there may be advantages to modifying protein and carbohydrate intake, the optimal doses of these macronutritents for weight loss have not been determined. Significant health benefits can be recognized with participation in a minimum of 150 min (2.5 h) of moderate intensity exercise per week, and overweight and obese adults should progressively increase to this initial exercise goal. However, there may be advantages to progressively increasing exercise to 200-300 min (3.3-5 h) of exercise per week, as recent scientific evidence indicates that this level of exercise facilitates the long-term maintenance of weight loss. The addition of resistance exercise to a weight loss intervention will increase strength and function but may not attenuate the loss of fat-free mass typically observed with reductions in total energy intake and loss of body weight. When medically indicated, pharmacotherapy may be used for weight loss, but pharmacotherapy appears to be most effective when used in combination with modifications of both eating and exercise behaviors. The American College of Sports Medicine recommends that the strategies outlined in this position paper be incorporated into interventions targeting weight loss and the prevention of weight regain for adults.
at 7:37 PM No comments:

A study just coming out (Caloric intake, aging, and mild cognitive impairment: a population-based study) showed that older people who consumed more than 2,143 calories a day had more than double the risk of a type of memory loss called mild cognitive impairment (MCI) compared to those who ate less than 1,500 calories per day.
at 4:14 PM No comments:

An overview of research conducted by Key and colleagues (2006) suggests that vegetarians are quite healthy. Some of the research even suggests that they may be slightly healthier than non-vegetarians, although in this case, it's probably difficult to figure out what the proper comparison group would be since most people who are vegetarians by choice tend to be very health-conscious. Vegetarians seem to be less susceptible to the major killers (especially cardiovascular problems but also cancer).

A study by Pettersen and others (2012) has shown that vegetarians (and especially vegans) have lower blood pressure--partly due to their lower weight.

Vegetarianism also seems to promote longevity. As Sabate points out, it isn't clear whether the benefits relate to the inclusion of so many healthy foods or the exclusion of meat.

A review by Bonnie and others (2011) shows that vegetarians tend to consume more essential nutrients.

Some research has indicated that vegetarians have lower colon and prostate cancer risks. (There's also an indication that legume consumption reduces the cancer risk created by eating red meat). It isn't clear whether the advantages of vegetarian diets are due to the increase in veggies or the omission of meat (for the former interpretation, see Hill, 2002).
at 2:40 PM No comments:

Some key work on the Paleo diet was performed by Eaton and Konner (1997). They claimed that the Paleolithic diet would have included 37% of energy from protein, 41% from carbs, and 22% from fat, along wtih vitamins, minerals, and fiber ingested at rates that would be unachievalbe via modern diets. Nestle (2000) expresses skepticism about Eaton and Konner's conclusions, claiming that we don't know much about the Paleo diet and that data suggests that a diet rich in veggies, fruits, and grains may, in fact, be optimal.

Frassetto and others (2009) have a study that suggests rapid benefits for the Paleo diet relative to a normal diet. Since the normal American diet's so bad, it would be nice to have some more meaningful comparisons. I also wonder how much sense it makes to have honey as part of the diet if its goal is to mimick ancient diets. My guess is that many cavemen walked around their entire lives without eating any honey or sweet (by our standards) fruits. Most of the proven diets actually have a great deal in common. The Paleo diet probably has far too much meat. But if this is remedied, the idea of eating veggies and protein rich foods with some nuts and no dairy products is probably common to all of the really good diets.

Hockett and Haws (2003) have a paper on "nutritional ecology" arguing that greater diversity within the paleolithic diet led to advantages in terms of longevity and infant survival. The divide the diet into mammal meat, organs, shellfish, fish, and plants.
at 3:33 PM No comments:

Guilford and Pezzuto (2011) have a good general paper on the observed health benefits of wine.
at 8:26 AM No comments:

Some Literature on Weight-loss

A number of studies (e.g., Hession, Rolland..,2009), suggest that low-carb diets do just as well in terms of outcomes while leading to less attrition.

In one paper, a very low calorie diet (VLCD) is described as being around 450 calories per day, but papers all vary. The designation seems to go up to the point of a 500-calorie daily deficit.

One study looked at the lack of predicted weight-loss in low calorie diets and concluded that it wasn't due to greater energy utilization but was rather attributible to lack of patient adherence.

A study by Marzetti and others (2010) examined the benefits of CR on cardiovascular aging.

Hainer and others (2008) provide a good overview of treatment effects on obesity.

Mullins and others (2011) talk about VLCs and ketosis. He argues forcefully that ketones aren't a problem at all for most people on VLCs and that kidney and liver function actually tend to improve.

Reviews of research have generally found that the more closely people monitor themselves (diet, exercise, weight), the better they do.
at 8:23 AM No comments: